The Institute for Studies had not planned to go live today. Unfortunately, you go to war with the topic you have, not the topic you want, and the New York Times has declared war on anonymous bloggers.


The blog of war is a subject dear to our hearts. The Institute is anonymous: many of us identify with marginalised communities and cannot publish under our own bylines. Our commitment to anonymity is so great that our Fellows do not know each other’s names, our Master is unaware of the Institute’s bank account details, and nobody knows how to access our Bitcoin wallet. Our strength stems from our disunity, and our shared beliefs are our greatest weakness.

We stand with SlateStarCodex, whose inimitable blog was taken offline today. We wished to take ours offline in solidarity - unfortunately, the Institute was offline, and instead we had to take it online. We hope our future readers will forgive us, but we felt compelled to speak out. Silence is consent.

Scott Alexander, the blogger behind SlateStarCodex, was recently threatened with having his real identity exposed - known in the pseudonymous wild west of the internet as doxxing - by the New York Times, a blog which pre-dates his by 162 years. Some Fellows of the Institute enjoy his work; others do not, but on this issue, we stand united. The Times blog boasts, by some estimates, as much as double the readership of SlateStarCodex, and on a point of principle, we stand up for the underblog.

Every Blog has its day

Our hero was told that the policy of the nation’s blog of record is to always use the real names of the figures on which it is reporting. However, the tireless work of our own investigative googling desk has discovered that the Times routinely offers anonymity to those who request it, to those who think it’d be cool to be anonymous, and to those whose anonymity its staff find particularly amusing. 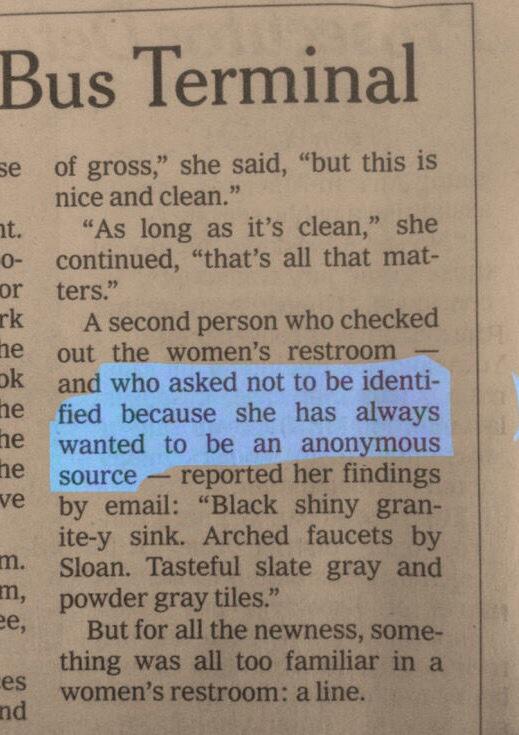 We assume the desire to unmask SlateStarCodex is not motivated by malice. Perhaps the editorial staff of the Times wanted to raise public awareness of Comrade Alexander so its fifteen readers can track him down, grasp him warmly by the hand, and offer him a bagel (“Doxx? I said lox!”). Possibly, revealing a civilian’s identity in spite of his requests, protests, and fear for his livelihood is the kind of hard-hitting investigative blogging for which the Times is rightly renowned. But to doxx him “because it’s our policy”? That just sounds like a doxx-ticking exercise.

We have no wish to relitigate the Iraq War - we were for it before we were against it - but during the Bush Administration, Comrade Miller was jailed for contempt of court (COC). Her crime? Refusing to doxx a source.

As logicians, we note that a true proposition is implied by all propositions, but as fans of the free press, we observe that the Times did not receive its doxxing policy on a gold tablet from Francis de Sales. It can, if it wishes, amend its policy on the doxxing of harmless psychiatrists.

We have had our differences with the Times - its silence on Rwandan genocide denial has been deafening - but until lately we did not consider it the most transphobic billion-dollar blog. But if it insists Birth Names must be used in lieu of chosen names, we will. Mischief Managed.

Blogger Laurie Penny claimed to be at risk of rape and death threats due to Facebook’s policy of only using real names. And Comrade Penny was free to #DeleteFacebook at any time! Deleting the Times takes two hours on hold and deletes it for only your wallet, not the internet-at-large.

Thinking outside the doxx

Let us review. The Times refuses to name a source - whose identity is relevant & germane in a story of national security - and its bloggers will stoically endure jail time to protect sources’ anonymity.

But when writing a profile of a psychiatrist whose life story is of interest to only his own psychiatrist, and who begs to remain known by only his first and middle name, the Times puts the ‘do’ in ‘doxx’.

Maybe this insistence on real names is in deference to modern corporate sensibilities, and goes hand in hand with the supplementation of poverty wages with hand-crafted frappuccinos.


Maybe the Times could throw a blog a bone. Give SlateStarCodex his chosen name.

Leave us a Message